warning: this is sappy

If the surprise day-after-Thanksgiving dinner Mme Chauchat made for Sarah and I last Friday wasn't a sign of the perfect weekend to come, I don't know what was. I had made a pumpkin pie for the English club the day before and I had been giving lessons on "Zanksgeeving" all week, but it never really felt like it was Thanksgiving. Not until I found myself back in Versailles, my home away from home. Instantly melting into my surroundings, I was engulfed by that ooey gooey feeling that only that place can bring. While every street corner provides a flashback to a happy memory, most of Versailles' golden hue for me is accountable to Mme Chauchat. The past two months have been tough. Really tough. And to be back in her house with her, her husband, and Sarah was the best feeling. I was home. For once I wasn't worrying about a single thing and I was relaxed and happy. The Thanksgiving dinner was just the icing on the cake... or rather the lattice top on our apple tart. 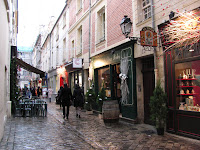 Sarah and I shared the loveliest guest room on the third floor, which had the most comfortable beds in the entire world. I seriously cannot remember ever having a better night's sleep. Gosh. It was all so perfect! Waking up in Versailles and at Mme Chauchat's no less. The day spent wandering through the Versailles gardens and the streets we had come to love so much. Visiting our old haunts (but not all of them- Ali, brace yourself- our hole-in-the-wall crêpe place is gone). Visiting "new haunts" i.e. the Starbucks that should have been in place when I was there suffering from big-coffee-cup-deprivation! And our neighbor Mr. Mumble, a college student renting a room from the Chauchats. Mr. Mumble is hands down the loveliest Frenchman I have ever met. Ever. Oh là là! 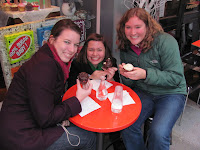 A last minute rescheduling of her grandson's christening meant that Mme Chauchat couldn't come with us to see Peter Pan in Paris. But instead of leaving an empty seat in our box, she gave her ticket to Mallory who had just finished her study abroad program that week. It was a dream come true to see it on stage! It turns out our production was indeed in French and also a musical. Did you know the Lost Boys can rap? Neither did we! River dancing is also, apparently, the thing to do in Neverland. We were by far the oldest people there without a child, but we had a splendid time! When they flew, it was magical! And when the entire audience shouted in French over and over that they believed in fairies, that was magical too! The cupcakes we had at Berko afterwards, sold to us by the nicest cupcake man in all the world, were also magical! Mmm... 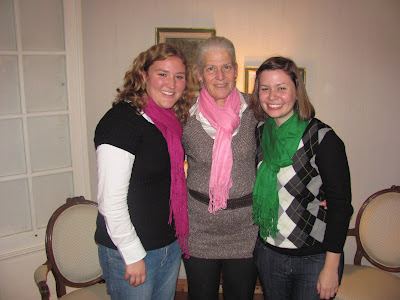 Not to overuse the words, but it really was a perfect and magical weekend. We watched It's a Wonderful Life, which Mme Chauchat had never seen, drank superfluous amounts of tea, learned easy recipes, and spent quality time together just talking about life. At one point Mme Chauchat said that it felt like there had never been a time in her life when she didn't know us. It's sort of a strange thing when you think about it, but I feel the same way. She also called us family. I feel the same way about that too! Maybe that's why Versailles is, and always will be, my home away from home.
Posted by Sally at 1:52 PM