Nobody here but us servantless American cooks

Sitting in the lounge at Le Cordon Bleu it was strange to be surrounded, once again, by a sea of cooks and chefs in white. So many memories from a summer spent serving at the Ritz came flooding into my mind. It was a jolly sort of atmosphere and Sarah and I kept pinching ourselves. Could we really be on the brink of taking a class here? 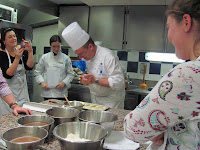 My heart, for one, was racing when we were led upstairs to the kitchen. It was a long room with an island down the middle and a border of stoves, ovens, refrigerators, and sinks. There were eight work stations for us that were set up around one end of the island. And as soon as the chef walked in it was go, go, go. We were given a list of ingredients for what we would be making that day: madeleines, financiers, and hot chocolate. For each of these the chef would start with a demonstration, giving us the directions in French. There was a translator in the room as half the class were English speakers, but Sarah and I were surprised as to how much we didn't need her. That was a confidence booster! As soon as the chef was done we had to race to whip up the same concoction. I felt like a chicken running around with my head cut off. I am no quadruple tasker!

Needless to say, we were both mortified at the thought of burning the butter etc etc, so we must have had permanent looks of sheer panic on our faces. But with the chef coming by and lying to us about how our batter was the most beautiful he had ever seen, we began to relax more and just had fun with it. Sarah and I were the youngest people there by at least 15 years. This seemed to make us Chef's immediate favorites. He loved that we spoke both French and English and seemed eager to swing by and say funny things to us in English like, "WHY ARE YOU SCARED OF ME?!?!"

Did you know that potato starch has no flavor and can be used to thicken your hot chocolate? Did you know that when you want to add flavors like cinnamon, orange, and/or vanilla (we used actual vanilla beans) to it that you're supposed to leave the whole stick, peel, bean or what have you in there the entire time from boil to finish? This allows the flavors to infuse the entire time. My milk took ages to boil- once again I found myself being the last person to finish- but it was very flavorful in the end. I am no expert in the kitchen and learning these little tidbits was a delight. I thought it was lofty before, but my opinion of chefs sky rocketed after this experience. I soaked up everything they had to say like the eagerest of sponges. 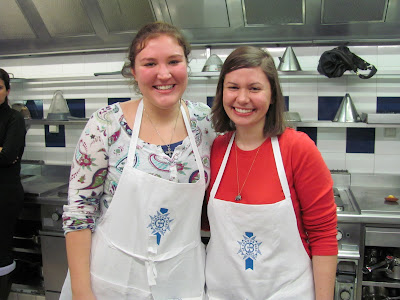 The experience was so lovely! It was a wonder to do something creative and challenging in Paris instead of the usual shopping and Starbucksing I have on my agenda. When all was said and done, I went to shake the chef's hand and say thank you. But he smiled and pointed to his cheek for the bises, the typical French greeting/farewell of a kiss on both cheeks. C'était adorable aka it was adorable. He is insistent that we come back and we would both love to after this. The rest of the night, and weekend for that matter, Sarah and I kept saying things like, "Hey Sarah! We took a class at Le Cordon Bleu!" TA!

And what better way to spend the rest of the weekend than at the Chauchat's? I tell you, there is none! Le Cordon Bleu, M and Mme Chauchat, Mr. Mumble, snowy mornings, buying cookbooks in French at FNAC, Pakito's cassoulet and sangria, a free tour of the Château de Versailles... It was the most delicious weekend I think I've ever spent.
Posted by Sally at 11:02 AM