I have just sealed what is probably the last letter from my tech students to my friends back in the United States. And, I've got to say, I did it with a great sense of accomplishment. At first they were dubious of the assignment, but upon learning they would corresponding with American girls it was approached with great enthusiasm. The letters from Kendall, Alex, and Amanda all came different weeks, but back to back. So each class those three weeks was devoted to ceremoniously opening the girl's letter (i.e. with a pair of scissors), reading it out loud, high-fiving, winking, fist-pumping, and then, finally, writing a worthy response. Some took the task very seriously. Others treated it more like a long distance dating game i.e. some of them said "I will be 21 in October" just to make 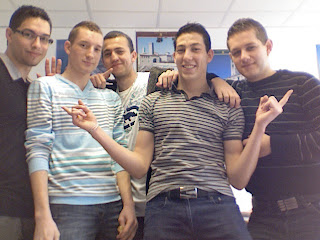 themselves sound older. There was a lot of "No! You can't say that!" and "There's no way you're asking that!" on my end. But it was all very good humored. They've been bragging to everyone, and I mean everyone, about this project. Consequently, this has gotten more students in the class (it's optional). I, for one, have been rolling on the floor laughing over some of their commentary. Once I know Amanda's gotten her letter, I'll be sure to tell you what they said. I don't want to spoil the surprise! Boys will be boys and they are no exception! Here's a picture they insisted on taking, courtesy of my Mac's built in camera, to show their new trans-Atlantic friends. 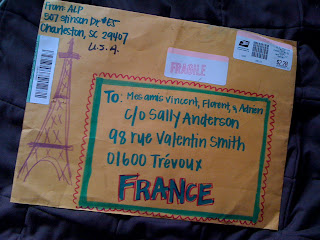 Yesterday we finished with Amanda's letter. As you can see, it was quite impressive! She even included a mixed CD for them. So now the boys think they're hot stuff. They were as devoted to writing back to her as they were for Alex and Kendall. And seeing them concentrate so hard and working out how to say certain things, I just swelled with pride. And I'm not the only one who's impressed. Their English teacher told me she's never seen them so inspired to work before. It's ironic because before I had even met this class I was told that their English was very weak, they were older (around 20), and could be very hard to handle. Even then I was told that if I didn't want to work with them, I didn't have to. But over and over again, I have walked out of that classroom impressed. They have worked so hard this year. Everything has been approached with enthusiasm, perhaps with a desire to show off, but enthusiasm all the same. This is the only group I've seen every week over the past seven months, so it's been very special to watch them improve. I guess I'm a sucker for lost causes, but I'm so glad I didn't turn the opportunity down.

And now it's spring break! First this means what Sarah and I have dubbed "Paris week." We're not really staying in Paris, but we're planning on doing a lot there. Home base will be Versailles and we couldn't be happier! From there we're going to Reims in Champagne. We've got two champagne tastings lined up and I'm so excited! After that I'll come back to Trévoux for a weekend of cleaning and packing. And then it's 3 days of class and bye bye Bomb Shelter! Eeeeee!!!!!!
Posted by Sally at 12:56 PM