it's what you make of it

PARIS!!! My good friend Brita is working as an au pair in the suburbs and the mom she works for said that I could come and stay for the weekend! I couldn’t believe it! I am truly blessed because this trip couldn’t have been more last minute. But with my carte 12-25, I got a great deal on my ticket. My roommate drove me into Lyon (she was had to be there for the German assistants’ orientation) and after a 2-hour train ride I was standing next to the Jardin des Tuileries with Brita! Naturally, she and I had a picnic in front of the Eiffel Tower that night! 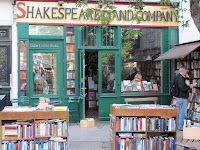 After sleeping in Saturday morning, we set off for the Latin Quarter, one of my all-time favorite places to be in Paris. First, we hunted down the famous English bookstore Shakespeare & Company. The inside looks just like I imagine Flourish & Blotts in Harry Potter would be- books, new and old, piled from floor to ceiling every which way, cozy corners with worn chairs, and rolling ladders. We spent the rest of the day poking around Paris before meeting up with our friend Mallory who’s studying abroad in Versailles. 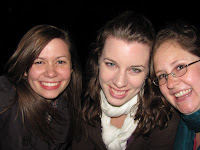 After, yes, another picnic in front of the Eiffel Tower, we set off to participate in Nuit Blanche (white night- or a night without sleep). This is a big shebang that happens once a year that goes from 7AM-7PM. All of these gardens, museums, etc are open for free with modern art being displayed. We did go see some weird, glowing crystals in Notre Dame... still can't figure that one out! But mostly Nuit Blanche just brought us lots of run-ins with drunkards and playing Chinese fire drill with some of them on the metro! And then… some major problem with transportation. A supposedly reliable source had told us that the trains and metros were running all night especially for the event. We discovered all too late that this was not the case. To make a long story short, we didn’t get out of Paris until 4AM… 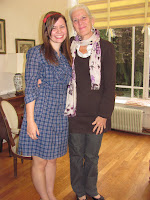 But we weren’t going to let our lack of sleep interfere with the glorious Sunday we had planned. On Friday I had called my beloved Mme Chauchat to see if I could stop by and see her, but she insisted that Brita and I come over for lunch! Pulling into the station at Versailles, it felt very much like a homecoming. But not as much as it did when Mme Chauchat opened her front door. Words cannot begin to describe how emotional I felt! Mid hug she said, “I told you we would see each other again, Peter Pan!” She fussed over us and then ushered us into the dining room where we used to take our conversation lessons. The table was set and her husband was eager to start pouring the wine! We ate very well indeed, two servings of everything, and then a dessert of raspberries and fromage blanc. Then we had tea and just talked for hours (she even let me use her phone to call home).

We also listened to “Thankful” off the Josh Groban album I had given her for Christmas two years before. It was such a treat to see the woman who inspires me being inspired by his voice. It’s funny… she always knows just what to say or do without you knowing what that might be. The opening line of the song is “Some days we forget to look around us.” There really is so much to be thankful for. My situation is tough at the moment, but it really is an amazing opportunity. And like Mme Chauchat said, “You have to choose happiness.” I’m taking that to heart. I am so blessed to be here. And she and many of my friends are only a train ride away. Furthermore, so many people from back home have been sending me notes of encouragement and I just want to thank you all for that! It means a lot!

It was a wonderful weekend! And I’ll be back in November to see the play Peter Pan in Paris with Mme Chauchat & anyone else who wants to meet us there! So excited!!
Posted by Sally at 1:42 AM