For once in my life all of my transportation ran smoothly last Friday! Not a single hiccup! It's a pretty big deal! After a four and a half hour train ride- complete with a PB&J, excessive amounts of Ryan Adams, and falling asleep/probably drooling on the window- I finally arrived in Colmar, a little town in northeastern France. 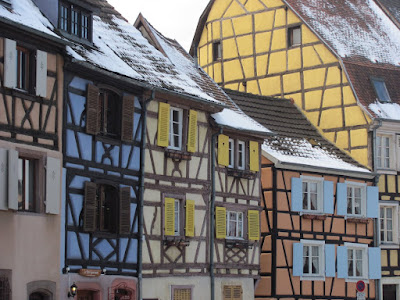 It was much warmer than anticipated. And by that I mean I was still wearing long underwear, but oh well. The sun was shining and Sarah and I hit the ground running. First we went to the Unterlinden Museum, supposedly Rick Steve's favorite. It's amazing how many details you notice after taking an art history class. Like any mature 22 year old, we pointed out these details to each other in our old art history teacher's hilarious drawl. Afterwards we picked up pretzels from a street vendor. Colmar has a bit of German influence as it's so close to the border, especially the cuisine. And, by golly, we were going to profit from it! We walked around town snapping all kinds of pictures as we tracked down a good choice for an Alsatian dinner. Sauerkraut and cider. Then we splurged on an American dessert and split a banana split. Yum, yum, yum. 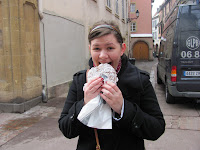 Not to drone on about local food, but my gosh... Saturday morning we found a boulangerie that made massive streudels loaded with bavarian cream. Oh. My. Gosh. Every time we took a bite, we sighed in delight and got covered in powdered sugar in the process. If I had to pick one and only reason to go to Colmar, it would be the streudel.

Colmar is called "la petite Venise" or the little Venice of France. More like petite petite. The canal is only 2 blocks long, but who's counting/disappointed. I'm sure it wouldn't be such a let down if it was nice and warm with all the flowers in bloom. Cute. But small. Small small. 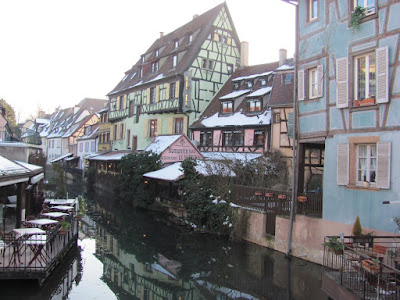 After spending about 10 minutes discovering all there was to see in little Venice, we went to lunch at a little Alsatian 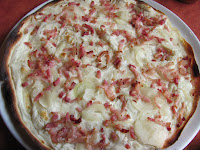 restaurant. I was intent on trying tarte flambée, a local specialty. It was the size of a pizza, but the crust is incredibly thin. I got mine "au nature," so I could try it the way it's generally intended. It had a crème fraîche base and was topped with onions and bacon. Definitely a pleasant surprise.

The rest of our time was spent introducing Sarah to Robin Hood (love it!!) and planning out our spring break, which is a mere four weeks away. Our first week is yet to be set in stone, but we went ahead and made all the necessary reservations for our second week/last hurrah. Hint: we'll be going out with a bang... or should I say bubbly?
Posted by Sally at 6:01 AM