Thursday night I spent the night with Nathan and Betsy in Lyon. I had a 6:30 am train Friday morning and couldn't get there in time for it from Trévoux. It was really lovely to see them again (they're engaged now- yea!!!) before heading down south. Thanks again, you guys! 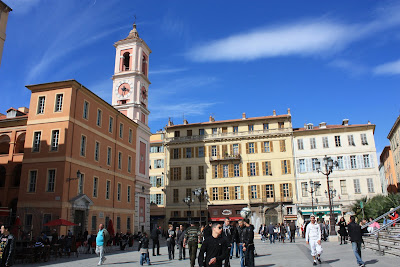 Why did I pick the earliest train to Nice? So I could be reunited with my mom as soon as humanly possible! Three months is way too long to go without seeing your mommy. This is no new revelation. If I was back home, I'd be calling her at least three times a day. Although... now that I think about it, that has happened on Skype too! I love my mom! And this reunion was long overdue. If you remember, I was supposed to meet her and my dad in Nice back in January, but their flight got cancelled. But Nice wouldn't stand for it and we wouldn't either! So- ha! Before noon, I was running into my mom's arms in one of my favorite cities in the world. Oh hugs! Hugs all around! I sure miss hugging! Kissing on the cheeks be damned! I'm going to be a hugging monster when I get back! Anyway, Friday generally consisted of warm fuzzies, random grocery shopping, gelato-ing on the beach, and Mom dropping her french fries in her Coke. Giggle fits! 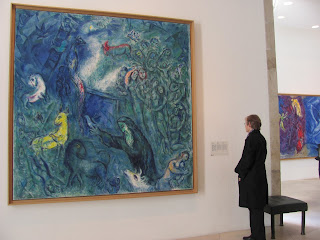 Saturday morning Mom went back with me to the Chagall museum. I absolutely loved this place. It's not really Mom's taste, but she was a good sport about it i.e. there was a "He must have been on drugs" comment in front of every painting. Then we headed over to the Parc des Arènes de Cimiez and the adjacent monastery gardens that look out at the sea. I had forgotten what the sun feels like, so it was really nice to stroll 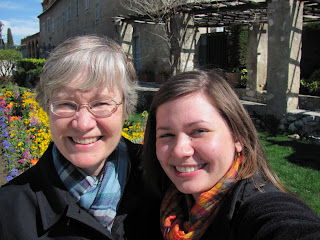 around outside! Then we breezed through the Matisse museum, which was totally worth it in the sense that it was free. In honor of my sister Emily, we went and had lunch (reunion #2: bagels!) at Emilie's. Then. Then we stepped into the Galeries Lafayette (the easiest way to describe it is as the Neiman Marcus of France... not that I frequent either except for this experience). Splurging came to a whole new level for me. Yikes/yea! Dinner... what else can I say except that somehow a french fry ended up in my wine? This trend needs to stop plaguing us! 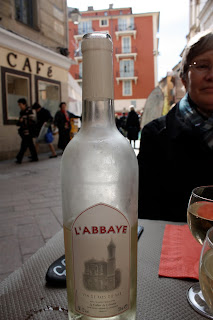 Sunday we were thrown off a bit by Europe's own spring forward. But we still got up early for the fruit and flower market. It was incredibly busy and packed. We spent a long time there and at one stand in particular. I will not specify at the risk of ruining some beautiful surprises. Then it was lunch time. And thanks to this particular lunch time, March 28th can go down as a day that will live in infamy. I took Mom to l'Abbaye, which is where I had mussels for the first time with my friends, Dad, and his copilots during Toussaint. I would omit certain details, but I feel like I need to take a page out of Bridget Jones' Diary and, as she says, tell "The truth. The whole truth." So here's a genuine rundown of exactly what happened once we took our seats. First, it should be 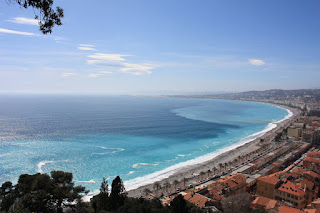 noted that our waiter is the same one I had last time and he was rather attractive. Which meant, all confidence in French went flying through the window. But, no matter, we still got our bottle of house wine i.e. la pièce de résistance. I don't know how it happened. Was it the sun? Was it the wine? Was it the guy? Was it the fact that I wasn't paying for anything? Needless to say that a whopping two (tiny French) glasses later I was three sheets to the wind. And then we climbed Castle Hill! How did we do that?! Mom... Did I miss something? It's very possible! But before I knew it we were at the top looking out on a stunning scene.