Paris (again and again) till the bitter end 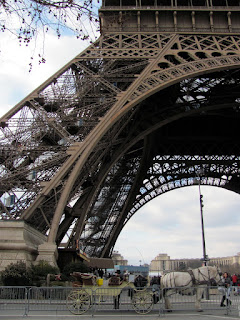 I know, I know, this weekend I took another trip to Paris. Maybe this seems excessive to you... but if you had friends there/didn't have to pay for a hotel, wouldn't you go overboard too? The great thing was that it felt so much longer than usual because I managed to get there Thursday night. The kids Brita au pairs for were still on vacation, so we arranged for me to get there as soon as possible so we could hit the ground running on Friday... Which naturally turned into us staying up till 3 am catching up and drinking a one euro bottle of champagne and consequentially sleeping in till one in the afternoon. We're 22. I make no excuses. Friday consisted of the usual bread-and-cheese picnic in front of the Eiffel Tower. Brita and I are big fans of doing this, cheesy as it may seem, and it has become a non-negotiable tradition for us no matter how cold it is. Then she took me to two of her favorite haunts: the American Library followed by a fun night at a local pub, The Bitter End.

On Saturday we went to l'Orangerie. My handy dandy education pass got me in for free, but I will happily pay up again and again to see it. It's a tiny museum in the Tuileries gardens that was specifically designed to showcase Monet's water lilies. Monet has been my favorite ever since I visited his house in Giverny back in 2007. The man was a true genius and it was absolutely staggering to stand in front of these huge panels of water lilies. I could have stayed there all day. But Brita and I had crepe stands to dodge (it is nearly impossible to cope with the fact that I gave up Nutella for Lent when they're unloading tub after tub of it in the streets) and dinner plans to make. We met up with some of Brita's au pair friends and had a nice 3 course dinner in the Latin Quarter during which I finally got to try tartiflette. 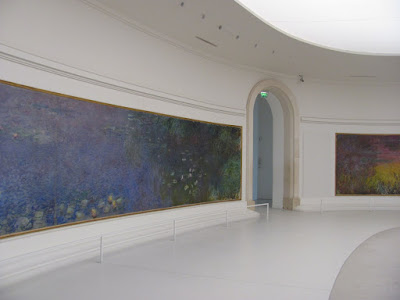 Sunday we indulged in one last late morning/afternoon before our work weeks began. We spent the "day" walking through the Marais district. The great thing about the Marais, besides it being trendy and cute, is that lots of stores are actually open on Sundays. Let me repeat that in case you didn't catch it... French stores open on a Sunday. Unheard of! To celebrate a great weekend, my love of Paris, and the fast approaching end of my program, I splurged on a ring at a neat boutique we found. Yea!! 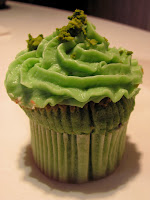 Then we went to Berko, the cupcake place that I found last fall. I had pistachio and, let me tell you, my taste buds are still in withdrawal. But then... Then came the highlight of the weekend. A happy coincidence had found me on the Hillsong website a week earlier and to my even happier surprise I discovered that they have a campus in Paris. So we went to the 4 o'clock service. It was incredible!!! Absolutely everything was in both English and French. We sang in French (they were all Hillsong songs, of course, so if you only know English you're still good to go with the subtitles) and the service was delivered in English and translated into French. I have never witnessed anything like it and what a joy it was! It was so refreshing and God was definitely moving! I really hope I can go back again before my time here is up! So thank you Brita for a great weekend!

And so I'm back in Trévoux... womp womp! But my students are as cheeky as ever and they kept me thoroughly entertained today with their pronunciation of 'recyclable.' I came home to a cup of tea, baked a quiche, caught up on The Office (oh my gosh!!!), and am about to snuggle into a reading of North and South. I confess that I watched the BBC adaptation first, but the book totally has me sucked in. I can't put it down and I'm more than a little in love with Mr. Thornton. It doesn't help me that Richard Armitage plays him in the film. Ugh! Was I born in the wrong era? I'm starting to wonder... Otherwise, I'm very much looking forward to this weekend in Colmar with Sarah!
Posted by Sally at 11:19 AM