The whole purpose of Sarah and I coming to the Champagne region was, naturally, to drink champagne. Thus, we set about selecting three champagne houses where we would get a tour of the cellars and a champagne tasting.

Yesterday we did a day trip out to Epernay, famous for its champagne thanks to its Avenue de Champagne. House after house on this street is devoted to the making of bubbly. First stop: Moët and Chandon, the makers of Dom Pérignon. The tour was a very scripted, but very informative description of the process from the vine to the shelf. The champagne was light and fruity and then we were on our way to champagne house #2. After a long walk down the never-ending street, we finally arrived at Mercier. Walking into the foyer we were face to face with a huge wooden vat that once held 200,000 bottles

worth of champagne at the World's Fair. It came second only to the Eiffel Tower. Needless to say, Mercier was an innovative man and is considered the Willy Wonka of champagne. He used to take people up in hot air balloons over Paris for tastings. How cool is that?! Sarah and I had decided to treat ourselves to a tour in English instead of French. But as the time for our tour grew near we realized... we were the only English speakers there. Which meant a personal tour from a charming young man. At first it was very awkward turtle. Especially considering that the tour through the wine caves is done on a laser guided train meant for 50 people. But, no, it was just the three of us in the first car driving around. At one point our guide said, "Say hello!" I turned and saw a worker and waved to him. Well it turned out that the guide hadn't finished his sentence yet and was going to say, "Say hello to the longest hall in the caves." I got a lot of grief for that one! Woopsies! During the tasting he told us that their motto is "Fresh, fruity, intense, and spontaneous." He proceeded to confide in us that he thought this saying was ridiculous, but asked what we thought of the champagne. Of course we said it was "Spontaneous!" Despite its awkwardness, it was a hilarious time and we really enjoyed it.

Today, we went to a tasting in Reims at Veuve Clicquot. For those of you who don't know, "veuve" means "widow." It was the widow of Clicquot who was the genius behind the brand and the business. I would say this was the best tour as far as understanding the history behind the brand. We learned what absolutely everything on the label means and it was just the most interesting of all the tours. To top it off we got to taste their La Grande Dame from 1998. The bottle costs 119 euros, which is probably why it was the most expensive tour of the three. But it was worth it! I've been spoiled! 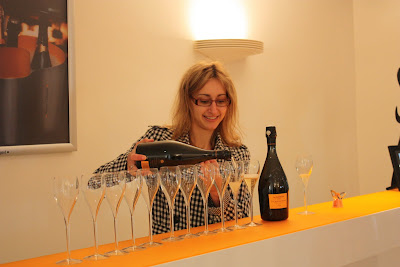 Paris week and then Champagne... I'd say it's been a great spring vacation. Tomorrow it's back to Trévoux where I will be without internet (NOOOOOO!!!!!!!!) for exactly one week before flying home for good. That is, of course, if volcanic ash doesn't get in my way. If I have to go through Japan, I don't care, I'm gettin' out! Please pray that for once I won't have any transportation nightmares! Cheers!

P.S. I tried adding more pictures, but my internet connection at McDonald's (yes... I know) is not very good! I'll try again at school next week. Sorry!
Posted by Sally at 8:21 AM