In other words, "Quiet on set!" That's right! On Wednesday we finally made it out to Pierrefonds. The castle is straight out of a fairy tale, perhaps why it was chosen to represent Camelot, and it looms high over the town. Sarah won major friend points all day for putting up with all my squealing and grabbing and going, "A big car! I wonder if it's Bradley and Colin!" Just so there's no further confusion, Bradley James plays Arthur and Colin Morgan plays Merlin. 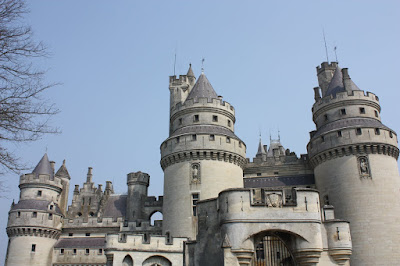 The Château de Pierrefonds was closed for lunch when we first got there. As we waited to go inside all these vans kept pulling up and all manner of film equipment was being unloaded. I've never witnessed a film set before and it was absolutely 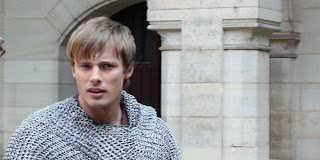 fascinating. If any of the crew are willing to switch jobs with me, make yourself known! At 2 o'clock I wandered into that oh-so-familiar-looking courtyard where Prince Arthur had slayed so many mythical creatures. No sooner had I paused to take a picture of mammoth structure that I turned and saw Bradley James and Colin Morgan walk right by me. Arthur, I mean Bradley, was in his chainmail and I have to admit I was struck speechless. It's a very weird thing. I've never been around an actor before, but seeing him dressed as this character I couldn't distinguish between the two!

Once Sarah could finally snap me out of la la land and what was apparently some intense blushing, we toured the castle. La la la, yes it was enchanting, but I was distractedly peeking out of every window to see any signs of filming. After walking through the parts of it that we could (some of the rooms were closed for filming) we sat outside with the rest of the tourists, all English speakers and fans of Merlin. I only just started watching this show since coming to 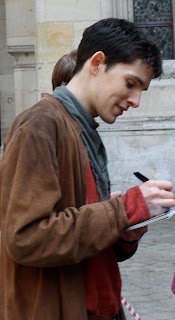 France. And I've generally referred to it as a guilty pleasure, but apparently this little quest has turned me into a groupie. Bradley and Colin came down to talk to the fans, but when I was one person away they were called back on set. Oh well! It was still really neat to get to see them and be on a working set. I'm not sure which episode of season 3 we were there for that day, but I can tell you to watch for the episode where there's what looks like a saracen attack on Camelot, possibly a dismembered skeleton, and Arthur having a sword fight in the stairwell. Ah! It was just such a unique opportunity! I can't believe they were actually filming and I'm so glad we got to go!

P.S. There's almost nothing funnier than seeing the knights of the roundtable taking pictures of each other with their camera phones! Except maybe "Prince Arthur" lounging on the front steps of the château, rocking his Oakleys.
Posted by Sally at 5:16 AM