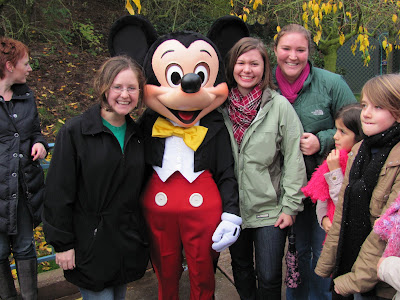 Merci Mickey! Sarah, Brita, and I were definitely the oldest people taking pictures with him, but I think we turned into 4 year-olds in the process! I couldn't get over the fact that we were the same height... It would seem that I suffer from a Peter Pan complex. So it should come as no surprise to anyone that we rode It's a Small World. Due to the aforementioned complexity, I continue to be awed by this ride. Particularly in this case because they combined "It's a Small World" with "Jingle Bells." 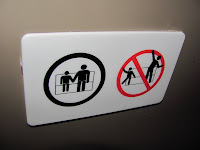 It was on this ride that a little boy sitting behind us pointed out this sign to his parents and exclaimed, "C'est interdit à danser!" In plain English, "It's forbidden to dance!" I nearly died laughing! Really it's warning you to stay seated, but dancing is a much more imaginative way to put it. Needless to say, we were quoting him the rest of the day. We rode Space Mountain, belted Euro Disney's theme song "Just Like We Dreamed It," skipped everywhere, went to the parade 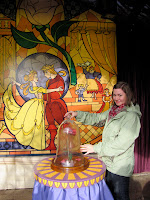 on Main Street, tried yanking out the sword in the stone, considered taking the enchanted rose out from under its glass case, and assumed the role of every Disney prince and princess's personal paparazzi. After all, growing up does not mean growing old! Which brings me to la pièce de résistance... Peter Pan!!! Sarah and I missed this storybook ride the last time we were here, so we broke out our fast passes. Hopping onto a pirate ship, we sailed into the Darling's 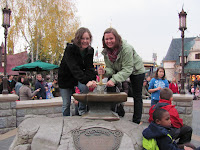 nursery, and flew out the other side with Peter's shadow to glide over the streets of London! "You Can Fly! You Can Fly! You Can Fly!" was playing and we had our arms out, singing along. I can't do justice to the pure elation, giddiness, and joy I felt! It's my favorite story!! And I can't wait to see it on the stage in Paris this coming Sunday with Sarah and none other than Mme Chauchat! I'm over the moon! And no, we don't know what language it's in! Nevertheless, Neverland is the same place and Peter Pan is the same boy who never grows up!

Brita and I also braved the still-rabid crowds at the movie theater to see New Moon/Tentation ("Temptation"). I was really impressed! If you know of my near meltdown after the first film, this is big news! It was in English, but with French subtitles. But if you've seen, I'm sure you know that you'll be distracted by something other than subtitles ;) A very entertaining weekend!

And remember... a spoonful of sugar helps the medicine go down, kiss the girl, forget about your worries and your strife, someone's waiting for you, perfect isn't easy, if you walk the footsteps of a stranger you'll learn things you never knew you never knew, Hakuna Matata, and above all... you can fly!
Posted by Sally at 8:22 AM