So the saying goes on Ali's blog! My best friend is pretty much the coolest person I know and the smartest. Which is what brought me to meet her in Bruges as she's doing this wild thing called getting your masters in a year. Phew! This meant she had a ridiculous amount of work to do, so we had about 24 hours to pack in as much as possible. Oh gosh, I don't even know where to begin except to say it was fantastic! 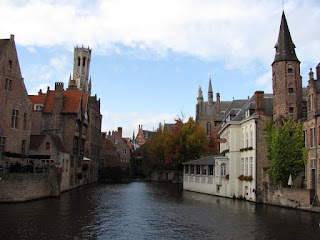 Sally and Ali. Yes, we have rhyming names and we are aware of the fact! Two peas in a pod. Reunited at last after six months of separation and nine hours of traveling on buses and trains. And, boy, when I saw her waiting for me at the end of the line I could not stop beaming for the life of me. Immediately falling back into the forms of communication that only best friends can begin to understand, we set off to take Bruges by the horns (or rather its postcard-perfect Disney Epcot-esque streets). This entailed food. Lots of food. French fries, waffles, cappuccinos, beer. Who needs another picture of a canal when you could be cozied up in the spitting image of Hog's Head making ESPN contacts (granted, they were a bit... gone) instead?! It was only 24 hours and yet I feel like I can't even convey their magnificence here because it was just pow, pow, pow in the memory making department.

Saturday started off with a "lie in" since we had stayed up doing all manner of girly nonsense until 3 AM. Finally rolling out of bed, I convinced Ali to cut my hair. Chop's more like it. Ah! So fun! We always pick out mood appropriate, make-you-brave-before-there's-no-turning-back-first-cut music to set the scene. And then I always pay her back in the form of Star Trek tickets or whatever she needs besides money; in this case hot chocolate. She took me to a tea room above this little chocolate shop where they bring out a ginormous (yes, ginormous) cup of hot milk with milk or dark chocolate morsels for you to whisk in. No words necessary, but... wow! I helped Ali embrace her tourist side, snapping photos of absolutely everything and squealing over our pictures as we snapped them. Then, back in her dorm, we squealed over our bands as only we can. I have lost track of how many concerts Ali and I have gone to together. Blasting their music on the drive there, holding our own in mosh pit after sweaty and ill behaved mosh pit, talking to the band after the show, and blasting their music again on the drive back. This is what we love to do! And we will do it again in Arizona! We have big plans. Never-ending, non-stop fun planning was a big part of the weekend! But until it's time to take a look at the long and exciting list we've made, we'll just have to take some more pictures to decorate our future apartment's walls. 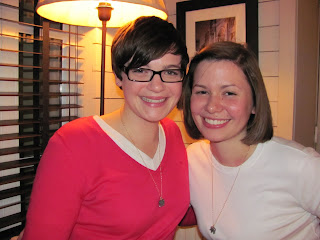 And what's a trip to Belgium without running into your dad? Yep, that's right! This is the fourth time I've gotten to see my dad over here! Before taking me back to Brussels, Dad met us for dinner in Bruges. It was probably the most perfect 24 hours I have ever spent. I would go back in a heartbeat and I will most certainly do it before my program is over. Yes, I know there's all manner of technology to communicate, she and I literally use it all. But sometimes there's nothing better than seeing someone in person. And those sometimes are often when you're braving Europe alone. Ali, thanks again for the being the perfect hostess and best of "ele-friends!" This weekend couldn't have been better spent or appreciated. More to come on Brussels with Dad...
Posted by Sally at 2:24 PM