from Brussels to Beaujolais 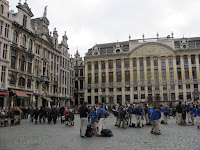 So Brussels. I got there Saturday night and Dad had all sorts of goodies from Mom waiting for me in the hotel. Including, but by no means limited to, the next three books in the Anne of Green Gables series! The next morning we were off to find coffee. I swear this stuff runs through Anderson blood. Coffee, coffee, coffee. My weekends are spent making up for my lack of it weekdays. Overdosing was never so delicious. Then it was chocolate, chocolate, chocolate. Dad took me to Chocopolis, the chocolaterie he is loyal to. And with good reason! The staff is as sweet as the chocolate. Picking out the pieces I wanted was nearly impossible. But it was worth it in the end with a 10% discount (loyalty rewarded!) and a free postcard. Really most of the day was spent wandering the streets and sampling all kinds of Belgian specialties. That is, with an exception to the escargot cart across from the Manneken Pis... gross! For dinner dad took me to Amadeo, "The Place for Ribs." I kid you not! This is apparently Belgium's answer to Damon's, but with a strange absence in BBQ sauce. I washed it down with an Irish coffee that was so strong it even made Dad flinch. If that doesn't tell you something about its potency, I don't know what does! All in all, great weekend with some of my favorite people.

And now... I must admit something to you. Last Wednesday I was planning on something since it was a holiday and I had the day off (side note: not that anyone at the school actually told me... yeah). But... the truth is that after an outing to the Armistice Day market in Trévoux I was so traumatized that I could not take fingers to keyboard. I had been thrilled beyond measure to see a vendor at said market selling vin chaud or hot wine. It seemed that my wait was over, so I pulled out my euro coin and stood smiling in line with great anticipation. And then I saw it. A box... of wine. Boxed wine. Boxed wine in France. Well that wiped the smile off my face! I quickly avoided eye contact and set of running down the street (no literally, the street) of Trévoux before saying something I would regret/fainting/whichever came first. 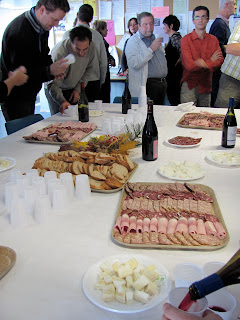 But today. Today that haunting memory is behind me. Today is the third Thursday of November. Today is the release of Beaujolais Nouveau! This "little wine" is meant to be drunk as quickly as possible. In fact, one of the teachers at the school told me that you wouldn't catch a French person drinking it after Christmas. Speaking of school... I have to say it was a great day! We got to drink Beaujolais Nouveau in the teacher's lounge! Only in France! They put out a spread of bread, cheese, and sausage and then popped open several dozen bottles. I limited myself to one glass of a wine from the next city over since I still had three classes to go. But it was divine! And despite it being an insufficient amount, I must say I was really happy the rest of the day! I asked around and it seems that the release of this wine is a big deal this one day and that's it. Everyone said it is a bigger deal in America than in France. But I took what they said with a grain of salt. After all, this is Trévoux and I can tell you... people here don't get out much!

Now that I've talked about this worldwide phenomenon, I must reveal to you my next cultural activity... EURO DISNEY!!! With Sarah and Brita this weekend! Sarah and I went for the Halloween decorations when we studied in Versailles and now we're going for the Christmas decorations! I am so excited! My goal is to get a picture with Mickey. If you remember the Captain Jack Sparrow incident from last time you will also recall that hunting down Disney characters- aka French Disney characters- is nearly impossible. I have my work cut out for me! In other news I am breaking out the Christmas music tomorrow! I don't have Thanksgiving, so I say it's allowed to start beforehand. Ah! Can't wait to listen to Hanson's Snowed In album! Comme la vie est belle!
Posted by Sally at 1:04 PM