sorry and not sorry

For the lack of updates! Finally I have been participating in f-u-n that lasted longer than a weekend! I got a bit swept up in exhausting myself physically, mentally, and financially. Having planned out this Toussaint on our own, it proved to be a stark contrast to the one we had two years ago where our itineraries were specific to the minute. While we firmly rooted ourselves in Nice for the majority of the time, we still came out of it dead tired! But despite a steady decline in our energy, Nice captured our hearts. We had the most spectacular time there! When I first got into the South of France, I have to admit, I was kicking myself for not asking to be placed there for the assistantship. But I quickly heard a little voice that said I could have just as easily been placed in the middle of nowhere down there. And then I would have hated it and what good what that have done?! The South will always hold a warm and, most importantly, untarnished place in my heart.

Since my last post was quite a while ago, I’ll just give you some highlights so as not to strike you over the head with a novel about my vacation:

1. Wednesday: The Chagall museum. I’m so grateful to have finally gotten to see his work in person. He is one of my all time favorites! And then we watched Anne of Avonlea, which was also awesome! You never know what's truly comforting to you until you're without it abroad. This series was one of those things for me in Versailles. But watching the second one was especially comforting this time around. Anne goes off to start teaching in this horrible school and how she rises above it... Can't imagine why I like it so much1 And then there's Gilbert Blythe!
2. Thursday: Dancing on tables at Wayne’s! This blog is all about new experiences and I might as well admit it here! After a trying day-trip out to Monaco, we decided a night on the town was in order. We had an absolute riot! And since I’ve told my dad this story, I feel I can go ahead and share this one too… In the middle of said dancing-on-the-tables this guy turns to me and says that he’s French and wants to give me a French kiss. He insisted that he wanted me to have a good vacation and this would really seal the deal. After saying no several times over, he finally left and we were thrown into the most uproarious of giggle fits as we continued dancing away to the beats of pretty much the coolest DJ ever.
3. Friday: Dinner on Dad in Nice! We all met up with Dad and his co-pilots at their hotel where he surprised us with some of Mom’s pumpkin-shaped sugar cookies. We nearly died of excitement! We had an aperitif at a café before dinner where Margaret and I tried pastis, the staple licorice-tasting liquor of the South. It has to be watered down it’s so strong, but I liked it a lot! At dinner Sarah and I got daring and had mussels (I am notoriously against seafood, so this was a big step), which were surprisingly delicious! Although, I must say, it’s a lot easier to be more adventurous when someone else is footing the bill. Thanks Dad for showing us all a great time!
4. Saturday: Sleeping on the train on our way to Lyon… that’s pretty much all we did besides the general eating marathon and watching The Big Bang Theory.
5. Sunday: Starbucks! 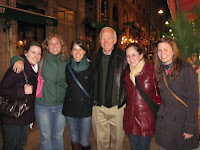 6. Monday: Dinner on “Papa Furman!” We got to meet up with the Furman group studying abroad in Versailles. This, of course, meant we also got to see my favorite professor, Dr. Allen i.e. the reason I became a French major! It was so good to see them all!

Now I’m back to life at the Bomb Shelter. But it’s not so bad. Hell must have frozen over because after staying at that hostel in Lyon (a beyond major step down from Europe's top rated hostel in Nice), I was actually happy to come back here. I don’t have to worry about random sick roommates, a lack of soap in the bathroom, or running into creepy old men on the way to the dirty bathroom in the middle of the night(quick rant: can someone please explain why families and people who are obviously not "youth" stay in youth hostels?). Yesterday I spent the entire day drinking Earl Grey and reading Anne of Green Gables. I’ve always loved the movies, but I’ve never read the books. I was just starting it, but I got so engrossed that I’m over halfway through. Whatever will I do when I’m done?! By all means send me something to read i.e. letters! I’ve gotten letters from Ali, Libby, and Aunt Maureen already! Each one was like the physical form of a silver lining to my day!

This weekend will be my first weekend in Trévoux. Beyond visiting the cheese man at Saturday’s market I’m not sure what I will do. I’m afraid I will exhaust my scanty book collection if that wretched letter from the internet company doesn’t get here beforehand. And continue my very academic pain au chocolat research… bien sûr!
Posted by Sally at 11:41 PM