I was finally able to break out of Trévoux this past weekend! And what better place to escape to than its complete opposite, Paris? But the best part of this Parisian jaunt was the company. Sarah was also able to escape her small town up north and we met up with my good friends from back home Andrew and Jonathan who were traveling through Europe with their friend Paige.

It's been a long time since I experienced Paris like a tourist. Having studied abroad just outside the city, whenever I spent the day there, it was spent in bookshops and cafés. But this time around we were running frantically back and forth across Paris, everywhere from the Champs-Elysées to the Latin Quarter where I had to tell one of the restaurant criers, "Ne me touches pas (aka "Don't touch me!" Do they really think this gesture will get people inside?)!" to the tiny streets of Montmartre... and, I'll admit, a lot of aimless wandering in between. By the Sacré Coeur we stumbled across the same square where I bought a painting from an artist during study abroad. It was raining, but some artists still showed up. And I'm so happy they did because I walked away with two charming little watercolors from a charming little artist named Gerard. 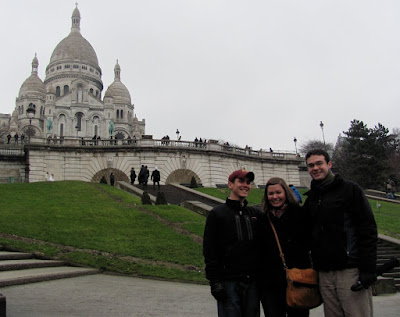 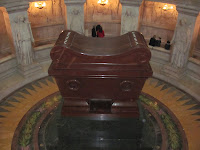 We even got to see Napoleon's tomb. This is something I've always wanted to do, but never gotten around to. Before we got to the tomb itself, we went through the exhibits at the war museum there. I was skeptical at first, but when I found myself standing in a room full of suits of armor, I was happy as a clam. Prince Arthur may or may not have something to do with that. What was really fascinating for me was seeing Napoleon's belongings. It was silly, but it was so strange to look at a hat and know it was Napoleon's hat. Once we hit the WWI and WWII exhibits, however, I found myself getting rather choked up. Because Andrew and Jonathan are both in the military, Air Force and Army respectively. And while I may have done a good job covering it up at the time, now the cat's out of the bag; I was trying not to cry! From there we finally went on to see the man himself, Napoleon Bonaparte. His tomb at Les Invalides is very grand and impressive. It was much more elaborate than I was expecting, but the tomb mirrors the man. I was very happy we got to go. Plus, after having a little chat with the ticket lady, she let us all in for free! So it was definitely worth it.

That night we went back to the apartment of a a family friend they were all staying with. We, but more particularly they, all cooked dinner there. It was so nice. To have a fully functioning kitchen, excellent! Not to have to say "Do you understand?" after anything you say in English, wonderful! Great company and conversation, the best! Sarah and I were talking about it later and we just gushed over being able to speak as fast as we wanted, use cultural references, etc etc. It sounds simple really, but the change of pace was much appreciated!

So thanks to Andrew, Jonathan, and Paige for a great weekend in Paris! Our jeans are fitting a little looser and our moods a little sunnier. We hope you had as much fun as we did! Feel free to share your chocolate mousse with us again any time ;)
Posted by Sally at 5:03 AM