it would have been nice

To be in Nice right now... But my parents flight to Nice got cancelled. It was a major bummer for all of us. But I have a sneaking suspicion I'll see them in France soon!

Luckily, I was able to cancel my ticket online instead of leaving at the crack of dawn to do it in person before my train left. So yesterday, I was able to sleep in. A great start to a weekend of doing nothing. I am in Trévoux after all! The most exciting part of the weekend so far was the anticipation of the premiere of the British tv show Popstars to Operastars. I had no way to watch it live, but I kept updating twitter and youtube for the results. One of the band members of McFly, one of my favorite bands, is competing. Basically, the show takes popular pop and rock artists and train them to sing opera. It was so bizarre to see, but really incredible! It started off rocky, but the more Danny sang the more I found myself squealing and clapping. Ah! I'm so proud! And I can't wait to watch his progression with his training; it's so interesting because it's a completely different style of singing for him. Watch it here: http://www.youtube.com/watch?v=K9sCDsYFom8 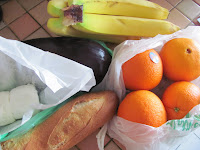 I could entertain myself indoors all day long, but today I decided to get up early and go into town. Today was market day and I want to take advantage of it on the weekends I'm here. It's a nice little set up with the same vendors every weekend. As you can see, I did not leave empty handed! I was most excited about the cheese. Yes, Mom and Dad, I did go see the cheese man. Well, it was actually the girl working with him that helped me. When they're in Lyon they have a huge array of cheeses, but not in Trévoux. So there was no typical brie or camembert to choose from. I just said I didn't want something very strong. She recommended a goat cheese and a cow cheese. They were each sixty cents. What a bargain! If you know me, I always turn my nose up at goat cheese. But this one is so mild, it's really remarkable. 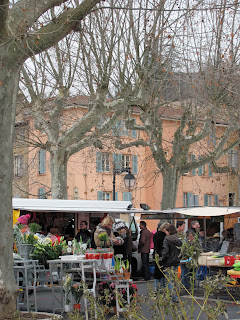 I suspect the rest of my days off will consist in a lot of tea and Robin Hood, my new BBC go-to. And then I suspect my week will consist in much of the same waiting around. Teachers keep telling me they're going to send me their students and then they don't. Frustrating! Hopefully we can resolve all of that. Until then, it would seem I need to do some lesson planning...
Posted by Sally at 7:54 AM