This is what I come back to...

CHAOS. Basically...
-they put my suitcase on the plane after mine
-made me wait around six hours in order to get it (they won't deliver bags to employee pass riders)
-which forced me to exchange my train ticket for something later
-my train was an hour late
-the cab driver (yes, I broke down and got a cab back to Trévoux) tried to charge me over 20 euros more than the agreed price
And then there was this: 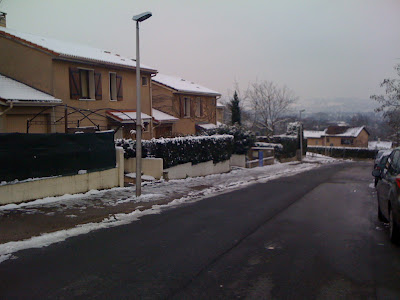 Snow. Everywhere. If nearly slipping and falling on the ice in front of one of my students this morning didn't tip you off, I would have died trying to get my fluctuates-between-49-and-50 pound back up this icy hill. And to top all of this craziness off, I apparently have a second orientation tomorrow in Bourg-en-Bresse. Luckily another assistant contacted me about it otherwise I never would have known. I had the school secretary call up the people in charge who said they forgot to send my letter. Ahhhh!!!!!! There's always something!
Posted by Sally at 11:21 AM