Walking in a Winter Wonderland

Deathtrap’s more like it! I am a fish out of water aka a Southerner in snow. It snowed all weekend long. At first I thought, “Isn’t this lovely!” I spent my weekend holed up in the Bomb Shelter, watching Merlin, drinking tea, and doing all the non-productive things I love doing as I recovered from jet lag. The only time I left the Bomb Shelter, I have to admit, was to make a snow angel in the back yard. 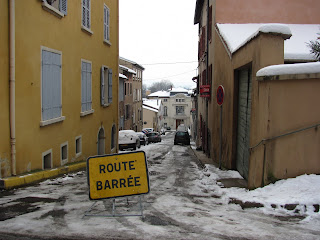 Finally, on Monday, I had to go to school to prepare worksheets for the week. I opened the front door and was immediately seized by what can only be described as pure terror. Not only was the snow nearly a foot high (keep in mind, people, I have never lived anywhere where this is a normal winter occurrence), but there was ice; scary expanses of thick ice as far as the eye could see and not a dash of salt to speak of. Never have I walked as slowly or as carefully as I did in that downhill journey. Once again, I was very scared I would slip and fall in front of one of my students. But luckily, the streets were so bad that they had gotten a half-day and none of them were there by that time. 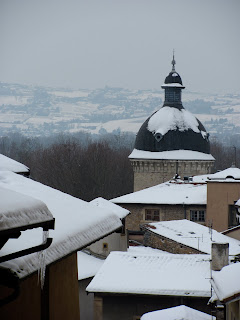 I must have been delusional from the blinding glare of white surrounding me because for some reason I decided to walk into town afterwards. I wanted some fresh air after a solid three days hiding indoors, needed to go to the post office, and, let’s be honest, was craving French bread. I gained all kinds of confidence after seeing that the steepest hill no longer had a speck of ice on it. After that things got tricky. My trek took twice as long as normal, but it was worth it. One boulangerie was open, so I made it back to the Bomb Shelter with a baguette in hand. And let me tell you, it’s the yummiest baguette I have ever eaten! 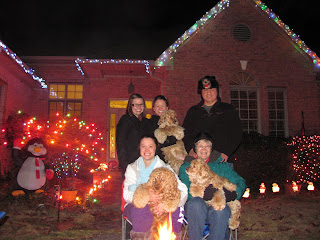 Winter wonderlands should be saved for Christmas. You’ve got company, Mom’s home cooking, and a wood burning fire. Not to mention a car and built-in chauffeur since no one trusts your driving capabilities not having been behind a wheel for three months. That being said, Christmas was perfect just the way it was: warmer, with friends, family, Avatar in 3-D (let me tell you, my mom loved it), our first "Christmas toast," and the happy absence of feeling like you will crack your head open with each frosty step of doom.
Posted by Sally at 8:30 AM